Is the grass greener on the other side? 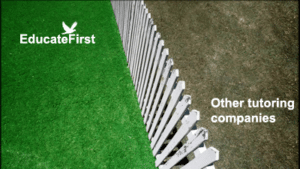 With many tutoring companies popping up from nowhere, parents are now spoiled for choice when considering private tuition for their children. Over recent years we have observed ‘copy cat’ companies offering a service very similar to ours, but at a higher cost to the parent. Does a higher price mean a better service? Many parents are often led to believe that you get what you pay for when it comes to private tuition, but many parents who left EducateFirst last year have returned to tell us a different story.

A number of parents who had been attending EducateFirst tuition classes decided to stop sending their children to our centres to try out one of the new tutoring centre that had opened up. Although the service appeared to be similar they charged a fair bit more than £6.25 per hour. This led parents to believe that their children may benefit more by attending the other centre as the teaching must be better based on the higher charge rate. After trialling out the new centre for several months, many parents have decided to return to EducateFirst as they feel they are paying too much money and not receiving a better service than at EducateFirst. In fact, in some cases parents rated our service to be superior to that provided by companies that charge more.

The additional influx of returning students has meant EducateFirst has had to employ additional staff and run multiple sessions in parallel to meet the growing needs of the local community. Unfortunately, due to the high costs involved in running the sessions, and bearing in mind the small fee the parents pay, we have not been able to accommodate all returning students. However, we continue to work with our team of tutors and management staff to ensure we provide this much needed service as soon as possible.

The moral of the story is: If something works for you, stick with it. Because the grass is not always greener on the other side!

COVID-19 Update Scroll to Top
FREE Tuition: We are re-opening on Sat 1 May. Register today and get 1 week FREE. Limited Offer.
Get Free Tuition
This is default text for notification bar
Learn more
This website uses cookies to give you the best experience. Continue to browse if you are happy with this.OKRead more